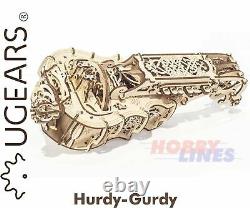 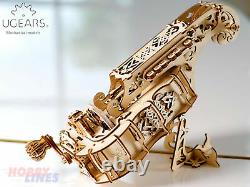 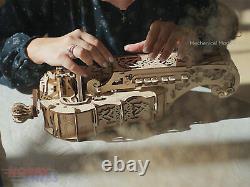 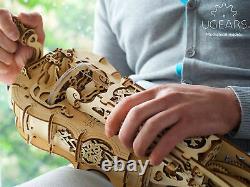 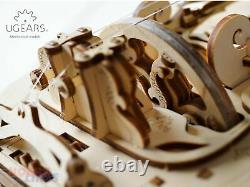 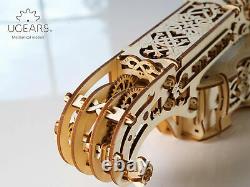 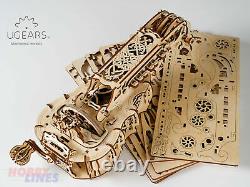 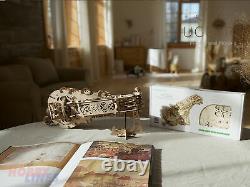 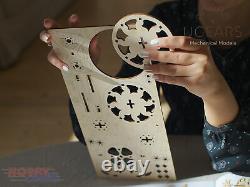 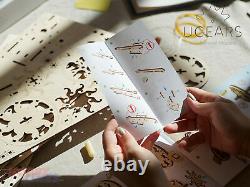 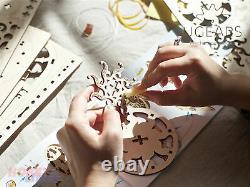 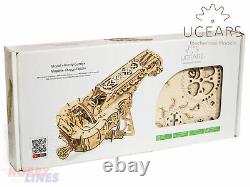 Inspired by the art of Celtic and Scandinavian medieval craftsmen and enriched by smart engineering of the XXI century Ugears is introducing Hurdy-Gurdy the worlds first mechanical musical model and the genuine gem of the collection. It is the most extraordinary mechanical model kit which is all-in-one: model for self-assembly, toy and fully fledged musical instrument. The Hurdy-Gurdy plays dancing melodies, from folk to modern, being the bridge between the medieval times and the present day.

The unique blend of the joy of creation, playing music, and engineering and design. Just build it together with your own hands and feel like Stradivari or a popular Hurdy-Gurdy star! The Ugears Hurdy-Gurdy model was successfully launched on Kickstarter in July, 2017. The hurdy-gurdy is a string instrument that produces a sound resembling one of a bagpipe by a hand-turned wheel rubbing against the strings working similarly to a violin and a fiddle bow. The history of this instrument begins in the 15th century. One of the earliest forms of the hurdy-gurdy was the organistrum (a portable organ) in Medieval Europe. After some modifications it became a common instrument among travelling musicians in England and went through its renaissance period in the later 17th-18th centuries as more of the noble class musical instrument for the amusement of the rich.

Those instruments were decorated by craftsmen with inlays and carving and had the built-in hurdy-gurdy mechanism into the guitar or lute body. Some call the Hurdy-Gurdy music "a medieval rocknroll", which we find pretty cool.

It captured us and we decided to create the Ugears' version of the Hurdy-Gurdy. Based on the 15th Century organistrum, Ugears has created an intricately detailed, fully functional mechanical version of this medieval instrument. The finished model looks remarkably akin to the original 16th century hurdy gurdy, giving it a wonderfully medieval aesthetic. This wooden attractive and educational model has a highly detailed exquisite décor of the body crafted in romantic style and turns the assembly and playing process into an exciting game and brings you hours of pleasure and fun.

The design of the Ugears Hurdy-Gurdy is based on the original prototype, therefore it includes the body, front and back decks, gears, crank (handle), wheel, neck, tuning pegs or hitch-pins, strings and tangent box that altogether form a single beautiful instrument. This self-assembled mechanical musical model is super easy to play, creating sound as the hand-turned wheel rubs against the melody and bourdon strings.

The Ugears Hurdy-Gurdys tuning pegs have a gear reduction mechanism for finer sound tuning of the melody and bourdon strings. For a more clear sound you can switch off the bourdon string using a little lever in the keybox.

Also we added the gear reduction mechanism into the crank (handle) to increase the number of wheels rotations. This allowed us to get a smoother and richer sound and preserve the compact size of the model itself. 6 keys are spring-loaded with rubber bands and little cranks in the keybox to ensure softer and more convenient play. Also the Ugears Hurdy-Gurdy has a special mechanism to adjust the height of both strings (melody and bourdon string) on the bridge and the beautiful planetary gears mechanism inside the body. The length of the melody and the bourdon string is 250 mm (from bridge to the nut).

The length of the strings between the middle of the wheel to the bridge is 30 mm. The Ugears Hurdy-Gurdy comes with everything needed for assembly. All the pieces are precut into the plywood boards and are easily removed for assembly following the detailed instructions provided. The only non-wood parts, by necessity, are the two strings that rub against the crank powered wheel and the rosin used to wax it. Estimated assembly time of the Ugears Hurdy-Gurdy is 4-5 hours for beginners and less time for professional builders.

Assembles without glue or special tools and without toothpicks. The model has a melody string for playing melodies and a bourdon string for a background sound. 6 keys correspond to 6 notes that are played by pushing the key while rotating the crank.

The released keys provide one more, seventh, note. The second (bourdon) string is tuned by tuning the peg in unison to the melody string or in any melodic interval (quart, quint, octave). The construction kit includes pieces of rosin to wax the wheel and improve the sound. The Hardy-Gurdy by Ugears is a full-fledged musical instrument. Its easy to play dancing melodies, from folk to modern. To start the music flowing, the player just need to crank the handle with one hand to kick off a drone sound from the bourdon and melody strings.

Pushing the wooden buttons with the fingers of the other hand changes the pitch of the melody string, as "spring-loaded" wooden blocks essentially shorten the string. Ugears will include some tablature with the kit to get newbies off to a flying start. The Ugears Hurdy-Gurdy brings the unforgettable time of working together on things that are popular among people of any age. Just put it together and you are ready to throw an original party giving a new spur to whatever music you like whether it is folk or modern playing your new unique Hurdy-Gurdy solo, duet, trio or quartet.

Our mission is to give an unforgettable time of working together on things that are popular for all ages. We want to connect the hearts of parents and kids.

And as a result - get a revived mechanical marvel. UGEARS' Best Moments - YouTube. In 2014, we joined our efforts to initiate a startup UGears to create our own production of modular mechanical models in which everything is real. Today we have more than 20 models and are continuously working on new designs for the future models! We are very happy to see that our models are appreciated by people of all ages.

This is the best way to engage constantly busy moms and dads in playing together with their childrenOur quality control is very strong. It checks every step of production.

HIGH QUALITY unlike others construction kits on the market that can be flimsy and cheap looking, our models are produced in Europe from high quality wooden materials. They are sturdy and long-lasting. MECHANICAL MOTION many construction kits when assembled are just static models. Our models produce motion, are self-propelled and some of them can go up to 5 meters!

NO GLUE ASSEMBLY our models dont need glue or special tools to connect parts. So you are are not exposed to harsh chemicals during assembly and have everything you need to enjoy construction of the models in the box.

UNIQUE DESIGN Our models are not just a construction kits, but a certain idea embedded in each design. Some of them have real life prototypes, some are genius inventions of our engineers. The beautiful structure of gears is not only creating motion, but also looks beautiful as home decoration. Unlike other construction kits and 3D puzzles, our models are educational both during assembly and as the end result. MADE OF WOOD MATERIALS we care about environment and what will happen to our models after many many years of service. As they are made of wooden materials they are not only good for you, but also for our planet!

We love what we do, but the most amazing thing is that YOU love what we do as much! This is a true gift for us. Listing and template services provided by inkFrog.

The item "UGEARS HURDY-GURDY Musical Instrument Wooden Mechanical Puzzle model kit 70030" is in sale since Sunday, April 26, 2020. This item is in the category "Toys & Games\Models & Kits\Boats & Ships". The seller is "hobby-lines" and is located in Stafford.