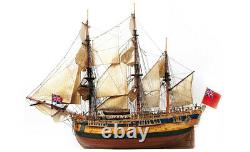 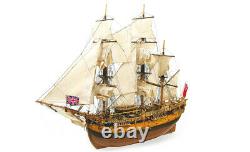 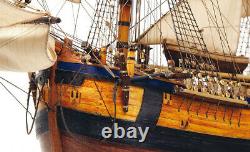 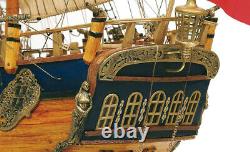 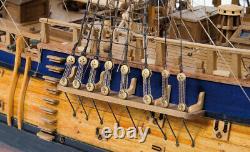 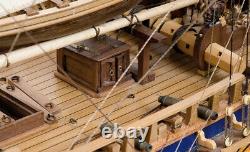 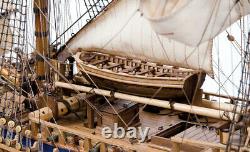 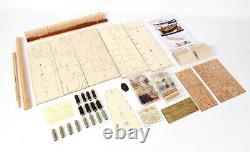 The Endeavour was built in June 1764 by Thomas Fishburn, originally under the name of the Earl of Pembroke. She had a displacement of 368 tonnes with an overall length of 106 feet, a keel length of 97 feet, and a maximum beam of 29 feet. She had a broad rounded bow, a flat stern and was square rigged. Originally she was engaged as a collier for the transport of coal. This fitting out took place at the Deptford shipyard, near London, where she was prepared for her first voyage, with new decks, cabins and spaces being built to house officers, scientists, servants, marines and crew, in all a total of 94 men. The Endeavour sailed round the world under the command of Captain James Cook, setting out from Plymouth, England, on 8th August 1768 and arriving back in London on 13th July 1771. The purpose of this expedition was to observe the passing of the planet Venus between the Earth and the sun, and also to estimate the distance between the stars and to use this information as a way of calculating the parameters of the universe.

This item is in the category "Toys & Hobbies\Models & Kits\Boats & Ships". The seller is "gerbelv2015" and is located in this country: LV.