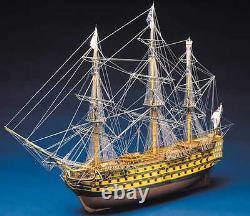 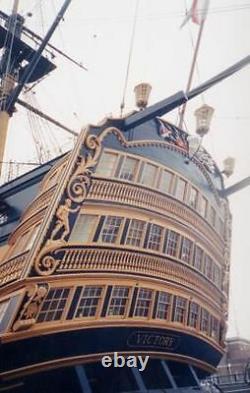 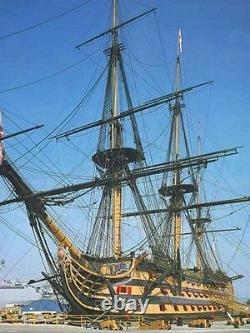 HMS Victory stands today as the world's oldest commissioned warship. Still manned by Officers and Ratings of the Royal Navy, the Victory has seen over 220 years of almost continuous naval service.

Best known for her role in the Battle of Trafalgar, the Victory currently has a dual role as the flagship of the Commander-in-Chief Naval Home Command and as a living museum to the Georgian navy. Launched in 1765 at Chatham Dockyard, the Victory was commissioned in 1778 and continued in active service for the next 32 years.

In 1812 the Victory was retired from frontline duty and anchored in Portsmouth Harbour, on the south coast of England. For the next 110 years the Victory remained at her moorings in Portsmouth Harbour fulfilling a combination of practical and ceremonial roles. In 1922, amid fears for her continued survival, the Victory was moved into Portsmouth's Royal Naval Dockyard and placed in No2 Dry Dock. Work then began on restoring the Victory to her'fighting' 1805 condition. The Panart kit builds up into a fine model of the flagship to Admiral Lord Nelson. The Panart kit features the following: A double plank on frame hull construction, building plans with general details, English instructions, lost wax brass castings walnut or lime planking, wooden masts and spars, brass and walnut fittings, laser engraved details, copper hull plating, rigging cord and silk flag.

All sheet ply sections are laser cut for accuracy. This model differs from other versions in that it includes the ships boat set and the copper tile hull plating. The item "Mantua Panart HMS Victory Nelson's Flagship Wooden Ship Kit Scale 178 Length 1" is in sale since Monday, September 29, 2014.