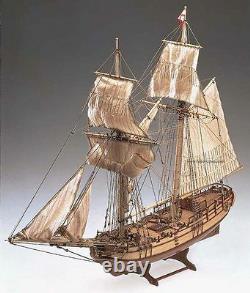 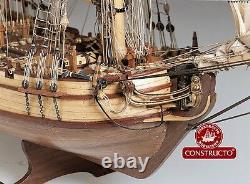 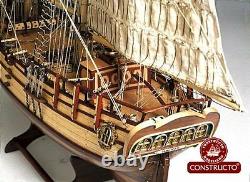 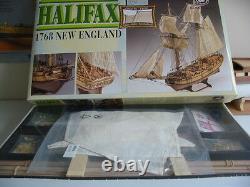 She is one of the best documented schooners from early North America. The careful record of her lines and construction by Portsmouth dockyard naval architects, and the detailed record of her naval service, make the schooner a much-studied example of early schooners in the New World. After an active career on the coast on North America she was wrecked on 15 February 1775 at Foster Island near Machias, Maine. She was reportedly intentionally run aground by a local pilot.

The court martial of Nunn, his officers, and crew, attributed the loss to the pilot's ignorance; nothing came of this as the pilot had disappeared while Nunn was arranging transport from Sheep's Island to Boston for his crew with a local shipowner, Mr. The wreck played a role in the Battle of Machias later that year, when Admiral Samuel Graves ordered that her guns be recovered. This new version of the kit uses state-of-the-art laser cut wood and includes a new and detailed photographic instruction manual and features. Also included are a set of pre-sewn sails to complete a museum quality look. While this kit comes with detailed instructions, the "Halifax" is best for intermediate to advanced builders!

This item is in the category "Toys & Hobbies\Models & Kits\Boats & Ships". The seller is "ageofsail" and is located in this country: US. This item can be shipped worldwide.